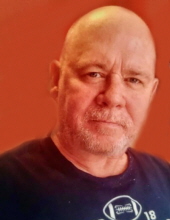 Beloved husband, father, and brother passed away on November 3, 2020, peacefully at his home, after an extended illness, with his family by his side. He was 65 years old. Terrence Patrick Lynch was born on November 17, 1954, in Madison, Wisconsin, to the late William and Eleanor (McCormick) Lynch. Throughout his life, education was very important to Terry. He attended Delta College and graduated with his Associates Degree and then went on to receive his Bachelor’s and Master’s in special education from Saginaw Valley State University. On December 29, 2005, he married the love of his life, Lucille Gonzales in Las Vegas. Terry was employed with the Saginaw Public School District as a special education teacher, retiring in February 2015 after 19 years of service. Terry enjoyed going to the casino, watching Jeopardy, and working on crossword puzzles. Above all he loved to read, his favorite authors were John Grisham and Stephen King. Terry will forever be remembered for his innate ability to connect with his students and people, the love and compassion he had for his family, and for his wise and intellectual mind.

He was preceded in death by a brother, Robert Lynch; sister, Kathleen Welling; and sisters-in-law: Kathy Lynch and Sharleene Lynch.

Honoring Terry’s wishes cremation has taken place. In lieu of flowers, those planning an expression of sympathy may wish to consider memorials to the Lynch family c/o Lucille Lynch. Lucille would like to thank Kate Lynch Catanzano for all of her guidance and support.
To order memorial trees or send flowers to the family in memory of Terrence "Terry" Lynch , please visit our flower store.
Send a Sympathy Card