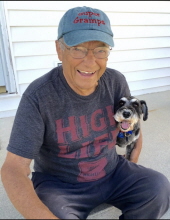 Our beloved husband, father, grandfather, and great grandfather Stanley J. Lisik of St.Charles, MI passed away on January 26, 2021, at age 76 years. Stan was born on September 19, 1944 in Saginaw, MI to the late Joseph and Loretta (LaPan) Lisik. After graduating from St. Charles High School in 1963, Stan began working for Eaton Corporation, retiring after 42 years. Stan was an outdoorsman, who enjoyed hunting and fishing. He found tranquility in nature. Stan was also an avid fan of all sports. He enjoyed playing football and softball. We will remember him for his love, kindness, generosity, and humor.

Honoring Stanley’s wishes, cremation has taken place. A funeral service is not taking place. Those planning an expression of sympathy may wish to consider memorials to The Saginaw County Humane Society or Undercover Angels.
To order memorial trees or send flowers to the family in memory of Stanley J. Lisik , please visit our flower store.
Send a Sympathy Card