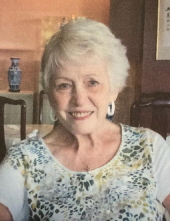 With profound sadness we announce the passing of Sally J. (Wacker) Maine, loving wife, step mother, grandmother, sister, cousin, aunt and friend. Sally was called home to her Lord and Savior on December 3rd, 2020. Sally was age 90, born on July 9th, 1930 in Saginaw, Michigan to the late Albert J. and Pearl (Barkholz) Wacker and was raised in Zilwaukee, MI.

Sally is survived by her loving husband Jack Maine having recently celebrated 50 years of marriage. She is survived by her step daughter Kristine Maine of Redondo Beach,CA, son-in-law John Fleming, grandchildren Alex and Natalia Fleming; and her siblings, Suzanne (Howard) Bank of Freeland MI, Carol (Patrick) McKee of Naples, FL and a special cousin, John Taylor, of Saginaw. She was also blessed with many loving nieces, nephews and their children. Also, Sally is survived by Jack Maine’ nephew David, Jim, Clifford Maine and niece Kathelen Maine.

For many years, Sally was an active member of St. Luke’s Hospital Guild serving as the Financial Secretary and Treasurer. She enjoyed being involved in the Guild’s fundraising projects, bazaars and the fellowship of attending auxiliary meetings. She was also treasurer of the East Central District of Hospital Auxiliaries in Lansing, MI.

Sally graduated from Arthur Hill High School with the class of 1948 and worked at Michigan National Bank while still in high school. She was employed by the bank for 38 years retiring in December 1985.

Sally truly enjoyed the weekend time spent with Jack in the home they built in Hale, MI. Feeding and watching the deer, birds, assorted wildlife and the changing seasons of nature as well as planting seedling pine trees on the property were some of her favorite things to do.
She also enjoyed being a member of the Saginaw Ski Club and skiing in Saint-Joviet, Quebec.
Another passion was domestic and international travel.

Sally was a loving and devoted caregiver to her parents, mother-in-law, family members and friends. She always made it a point to attend family gatherings and loved a good long conversation. She never missed a chance to share a smile or interject some faith-based guidance in those conversations. She was always an excellent example of a Christian woman, putting her faith first in all that she did. She will be deeply missed by family and friends alike.

A Christian Funeral service and celebration of life will be announced at a later date.
Memorials in Sally’s name may be made to St. John’s Lutheran Church, Zilwaukee or a charity of choice.
To order memorial trees or send flowers to the family in memory of Sally J. (Wacker) Maine, please visit our flower store.
Send a Sympathy Card