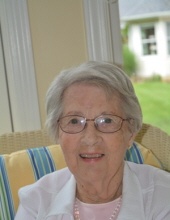 Ruth Ellen Cutler, age 96, passed away on January 18, 2022. A memorial service will be held at Bridgeport Baptist Church on January 29th at 1:30 PM. The family will receive friends at the church on that same day from 1:00 PM, until the time of the service.
Ruth was born on March 14, 1925 in Elmwood Township, MI to the late Wallace and Eliza (Evans) Morse. She attended school at the Frenchtown School in Elmwood Township where she excelled in all her class work and received many awards. She graduated from 8th Grade on June 2nd, 1939. She then spent several years working in various jobs in the local area. She met her future husband, Charles W. Cutler, in 1942 and they were married on July 31st, 1943. She continued to work in the local area while her husband served in WWII, from 1944-1946. She and Charles had four children. Raising those four children and loving them, and their extended families, became her labor of love for the rest of her life. She and Charles were married for over 70 years. He passed away on May 6th, 2014. Ruth will long be remembered for her remarkable skills as a baker. Her pies, cinnamon rolls and cookies were one of many ways she showed her love to her family and friends. She also loved to read, put together jigsaw puzzles and play Euchre and Pinochle, which she did very skillfully. She was a remarkable lifelong learner who demonstrated great wisdom throughout her life.
Ruth is survived by her four children, Tom Cutler (Chris) of Lansing, Dara Lapprich (Gary) of Saginaw, Jim Cutler of Grand Haven, Gail Fikes (Morrie) of Montrose, and seven grandchildren and fourteen great-grandchildren. Ruth was a loving wife and mother who faithfully served her Lord and Savior, Jesus Christ.
Memorial contributions may be made in her name to the Rafiki Foundation, PO Box 1988, Eustis, FL, 32727.
www.casefuneralhome.com
To order memorial trees or send flowers to the family in memory of Ruth Ellen Cutler, please visit our flower store.