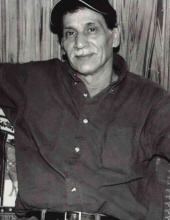 Ross passed away on September 9, 2021 at the age of 75 at his home, surrounded by family. He was happily married to Connie (Knepper) Cornejo for 45 years. Ross was a remarkable father, husband, grandfather and great-grandfather. He was a great son, brother, uncle and cousin. He was the son of the late Fermin and Catalina Cornejo from Merrill. Ross was born on October 6, 1945, in Monterrey, Mexico. He later relocated to Mississippi with his family before they moved to Merrill, Michigan where they settled. He graduated from Merrill High School. Ross was employed by Timbertown as a custodian then moved on to various occupations. He worked at Frigidaire for eight years up to his retirement.

Ross had a big love for tractors and would never pass down a tractor pull. He enjoyed working on vehicles and always found something to work on in his garage. He lived by the saying "there's no such thing as being bored." But above everything else he enjoyed being with his family most.

He was predeceased by three brothers, Valentino, Guadalupe, Rueben Cornejo and one grandson, Rick (RJ) Cornejo.

Funeral service will be held at 11:00 am on Friday, September 24, 2021, at W. L. Case & Company, 125 E. Saginaw Street, Merrill Michigan. Burial to follow in Sacred Heart Cemetery. Friends may visit with the family from 4:00-8:00 pm on Thursday, September 23, 2021, at the funeral home, as well as from 10:00 am until the time of the service.
To order memorial trees or send flowers to the family in memory of Rosario "Ross" Gutierrez Cornejo, please visit our flower store.