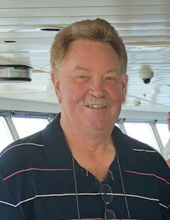 Beloved husband, father, grandfather, brother, and friend passed away on Monday, September 6, 2021, at MidMichigan Medical Center in Midland, at the age of 65 years. Roger was born on November 29, 1955, in Midland Michigan, to Wanda (Crittenden) Poscal and the late Joseph A. Poscal. He was a 1974 graduate of Breckenridge High School. Following graduation, Roger proudly attended Michigan State University where he graduated with an Associate’s Degree in Agriculture. He married the love of his life, Dawn Morningstar on October 10, 1981; she survives him. Roger was employed with the Monsanto Company for 18 years where he was recognized twice as a Master Sales Recipient, which is awarded to less than 1% of the sales worldwide workforce. Then, Roger and his wife Dawn created Poscal Seed Service. He was an avid outdoorsman, finding peace and happiness in nature, especially hunting, fishing, and camping. As a conservationist for the hunting of wildlife, he was a member of the Dawn to Dusk Hunt Club, Outlaw Coyote Hunters, National Wild Turkey Federation, and the Marion Springs Beagle Club. He was also a member of the Michigan Agri Business Association, Jonesfield/Lakefield Township Fire Department, and the Township Fire Board. Roger was a priceless and profound communicator, made friends with anyone and everyone, and had an excellent sense of humor. He had the innate ability to connect with all people through the gift of gab. Roger also enjoyed watching NASCAR races. He treasured and cherished his family and friends. Roger left his indelible mark and tremendous impact in this world with so many people through his kindness, selflessness, and for believing in people. Most of all, Roger loved and adored his wife, Dawn, his children, and grandchildren.

He was preceded by his father, Joseph A. Poscal; mother- and father-in-law, Betty and Daniel Morningstar.

A Memorial Service will take place at 11:00 a.m. on Thursday, September 16, 2021, at the W. L. Case & Company, 201 N. Miller Road. Pastor Steve Gulick will officiate. Friends are welcome to call at the funeral home on Wednesday from 3:00 p.m. to 8:00 p.m. and on Thursday from 10:00 a.m. until the time of the service. In lieu of flowers, those planning an expression of sympathy may wish to consider memorials to Pheasants Forever, Leukemia and Lymphoma Society – Merrill Community Team, or the Jonesfield/Lakefield Fire Department.

To order memorial trees or send flowers to the family in memory of Roger Poscal, please visit our flower store.
Send a Sympathy Card