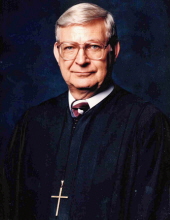 Reverend Orville Maasch of Saginaw, MI passed away to his eternal home with Jesus at age 92 on June 12th, 2022. Orville was born June 6, 1930 in Vesta, MN, the son of the late Fred and Clara (Lemke) Maasch. He was baptized and confirmed in St. John's Lutheran Church in Vesta. He graduated from Echo High School in 1948 and from Bethany Lutheran College in Mankato, MN, in 1950. He taught one year in St. Luke's Lutheran Elementary School in Wood Lake, MN, 1951. He then attended Concordia Lutheran Seminary in Springfield, IL and graduated in June 1957. He married Doris Arndt on July 7th, 1957 at St. John's Lutheran Church in Vesta, MN, and began his ministry at Grace Lutheran Church in Kenton, OH, 1957-1959. He then served as pastor in St. Luke's Lutheran Church, Vassar, MI from 1959-1995.

He served the church at large in various roles. For 20 years he was the Circuit Pastor of the Eastern Circuit, Nothern Conference of the Michigan District. At various times during those years, he served as a member of Michigan District for 20 years as the secretary. He also enjoyed working with 15 vicars from Wisconsin Lutheran Seminary, Mequon, WI, who were concluding their education to become ministers. Upon his retirement in 1995 he served for nine years as Head Chaplain of the Martin Luther Home of Michigan, which had four nursing homes in the state of Michigan. His greatest joy was to spread the Gospel of Jesus Christ.

He had a true green thumb and enjoyed tending to his lawn and flower and vegetable gardens. He also very much enjoyed planning and making woodworking gifts for his children and grandchildren.

He leaves behind to remember his life of praise and thankfulness to the Lord, Doris, his wife of 64 years, one son, and two daughters: Rev. John Maasch and his wife Jill (Schultz) in Dayton, MN; Mary Franzo and her husband Robert in Northport, MI; and Susan Gennrich of Sedona, AZ. He leaves behind eight grandchildren and nine great granchildren. He was predeceased by three brothers and six sisters.

Funeral Service will be held at 11:00 am on Thursday, June 16, 2022, at St. Paul Evangelical Lutheran Church, 1020 Court Street, Saginaw. Pastor David Naumann will officiate with burial to follow in Eastlawn Memorial Gardens. Friends may visit with the family at the church from 10:00 am until the time of service.

To order memorial trees or send flowers to the family in memory of Reverend Orville Maasch, please visit our flower store.
Send a Sympathy Card