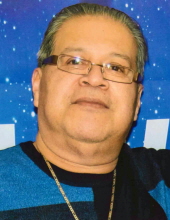 Beloved husband, father, grandfather, great-grandfather, brother, uncle, cousin and friend passed away on Tuesday, December 21, 2021, at his home, with his family at his side; at the age of 71 years.

The son of the late Anastacio and Isidra (Gonzalez) Rodriquez, Mingo was born on October 5, 1950 in Saginaw, Michigan. He graduated from Saginaw High School with the class of 1969. Mingo then proudly served in the United States Marine Corps until he was Honorably Discharged. He married the love of his life, Beatrice F. Chavez on June 12, 1971, at St. Mary's Cathedral, Saginaw; she survives him. Mingo worked at General Motors for 30 years of loyal and dedicated service. He was a member of St. Joseph Catholic Church, where he served as a Hospitality Minister for over 18 years. Mingo enjoyed listening to his music, watching all sports, and was the family jokester. Above all, Mingo cherished the time spent with his family and loved ones, especially sitting on the porch with his grandchildren and great-grandchildren. Mingo would be best described as a family man; If someone walked in as a friend, they would walk out as family.

Funeral Liturgy will take place at 11:00 a.m. on Monday, December 27, 2021 at St. Joseph Catholic Church, 936 N. 6th Avenue, Saginaw, Michigan 48601. Rev. Fr. Francis W. Voris, OFM Cap will officiate. Military Honors will take place under the auspices of the United States Marine Corps and American Legion Post 22. Friends may visit the family from 9:00 a.m. until the time of Mass on Monday at the church. Those planning an expression of sympathy may wish to consider memorials to St. Joseph Catholic Church.