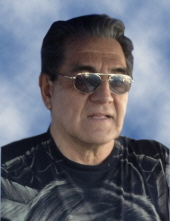 Beloved husband, father, grandfather, and brother passed peacefully with his family by his side on May 3, 2022. He was 76 years old. Paulo Rodriguez was born on June 25, 1945, in San Antonio, Texas, to the late Marcos and Ernestina (De Los Santos) Rodriguez. He honorably served his country by enlisting in the United States Army 82nd Airborne Division, until his honorable discharge. In the early 1970's, Paulo and his family moved to Michigan, making Saginaw his home. He was employed by the Eaton Corporation as an electrician and union arbitrator, retiring after 30 years of loyal and dedicated service. Paulo created many lifelong friends and special bonds with his Harley riding buddies whom he met upon moving to Michigan.

He is survived by his wife of 17 years, Leanne, who shared a beautiful life together. Together, Paulo and Leanne were both visual people and were grateful to have a blast while traveling all over the country. Also surviving are four children: Brenda (Dan) Pollard of Freeland; Danny (Barbara) Maldonado of Thomas Township; Larry (MaryBeth) Rodriguez of Saginaw Township; Cynthia (Andrew) Romero of Grand Junction, CO; eight grandchildren: Conor Pollard, Jordan Pollard, Jessica Maldonado, Cody Maldonado, and Nicolas Maldonado and his girlfriend, Aleah Huerta, Madalyn Rodriguez and her fiancé, Joe Popielarz, Macy Rodriguez, and Ashley Barker; a special niece and nephew: Jeanette Jones of Port St. Lucy, Florida; Lee (Tracy) Sauceda of Centerville, VA; and many extended family and friends across the country.

He was preceded by his first wife, Rachel (Rendon) Rodriguez.

The family would like to extend a heartfelt thank you for celebrating all the good times everyone shared together.
Honoring Paulo's wishes cremation has taken place. In lieu of flowers, those planning an expression of sympathy may wish to consider memorials to a charity of the donor's choice, or to ride your Harleys, bowl your hearts out, or have a drink in remembrance of Paulo. AKA: "CHIEF"and "FBI"

To order memorial trees or send flowers to the family in memory of Paulo Rodriguez, please visit our flower store.
Send a Sympathy Card