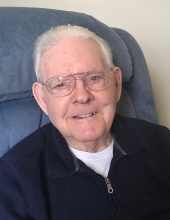 Loving father, Grand Father, and Great Grandfather passed away peacefully, surrounded by family on February 9, 2021 at the age of 96 years.

The son of the late Benjamin and Dorothea Eickemeyer Kern, Martin was born in July, 9, 1924 in Munger, Michigan. He married Irene M. Bloniarczyk in August, 1951. She predeceased Martin in March of 2015.

Martin was a proud veteran of WWII serving in the infantry in Europe. He was wounded crossing the Rhine River in 1945. After recuperating in France Martin returned to duty in Germany as part of the occupation and was discharged in 1946. He was awarded the Purple Heart and Bronze Star during his tour of duty.

After discharge, Martin returned home to Michigan where he graduated from Wayne State University and then began his career at Draper Chevrolet where he spent 40 years, retiring in 1989. He was a member of Peace Lutheran Church and was very active in the Northwest Kiwanis Club of Saginaw. He became President of the local chapter in 1974 and also as Lieutenant Governor of Michigan Kiwanis in the late 70’s.

Due to Covid typical visitation and Funeral will not be conducted at this time. The family plans to hold a memorial service later in 2021 or when conditions permit.
Martin will be entombed at Oakwood Mausoleum. Special thanks to the caring staff at Bickford of Gurnee, Illinois and Heartland Hospice Care. Those planning an expression of sympathy are encouraged to consider donations to Peace Lutheran Church or a charity of your choosing.
To order memorial trees or send flowers to the family in memory of Martin H. Kern, please visit our flower store.
Send a Sympathy Card