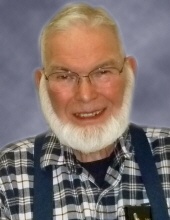 Beloved husband, father and grandfather passed away on Tuesday, January 4, 2022, at Covenant HealthCare - Cooper; at the age of 85 years.

The son of the late Harry and Clara (Moeggenborg) Schimmoller, Louis was born on November 16, 1936 in Shepherd, Michigan. He proudly served in the United States National Guard from 1963 - 1973 until he was Honorably Discharged. Louis married Bonniejean Pawlanta on May 13, 1967 at S.S. Peter and Paul Catholic Church, Saginaw, Michigan. He worked as a diesel mechanic for many loyal and dedicated years of service until he retired in 1995. Louis was a member of S.S. Peter and Paul Catholic Church, where he served as an usher for many years. He enjoyed hunting, fishing, motorcycles, small engine repairs and scuba diving. Above all, Louis cherished the time spent with his family and loved ones.

Honoring Louis’ wishes, cremation has taken place. A Memorial Liturgy will take place at 10:00 a.m. on Saturday, June 4, 2022 at St. Dominic Parish, S.S. Peter and Paul Catholic Church, 4735 W. Michigan Avenue, Saginaw, Michigan 48638. Rev. Fr. Steve Gavit will officiate. Burial will follow at St. Vincent De Paul Catholic Cemetery, Shepherd, Michigan. Friends may visit with the family from 9:00 a.m. until the time of mass on Saturday at the church. In lieu of flowers, those planning an expression of sympathy may wish to consider memorials to St. Dominic Parish, S.S. Peter and Paul Catholic Church.
To order memorial trees or send flowers to the family in memory of Louis Henry Schimmoller, please visit our flower store.