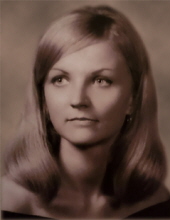 No Services will be held

Liga was born in Memmingerberg, Germany April 10, 1946. In 1950 her parents, the late Valija (Hafners) and Arvids Reinis (refugees of Latvia), with four year old Liga, legally immigrated to United States. She became a citizen of the United States in 1957. Liga graduated from Arthur Hill High School and attended classes at Delta College. She worked at Michigan Bell Telephone and later as a Florist Arranger and Designer. Liga married John P. Crozier in 1967. He predeceased her on February 12, 2011. Together they had two children, Christopher Crozier and Lisa Crozier. She loved reading, swimming, walking and her thumb was thoroughly green. Liga will be sadly missed by all who knew her, including numerous friends and family.

Honoring Liga's wishes, cremation has taken place. A memorial service will be announced at a later date. We take Solace in knowing Liga Crozier is reunited with her husband John Crozier together in Eternity.

To order memorial trees or send flowers to the family in memory of Liga Crozier (Reinis), please visit our flower store.
Send a Sympathy Card

No Services will be held