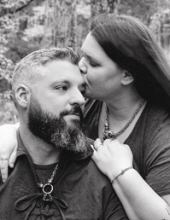 Lonnie passed away peacefully in his wife’s arms on May 30, 2021 at Covenant Medical Center in Saginaw. He was 40 years of age. Lonnie was born on September 19, 1980 to Leon Joseph Baudaux IV and Mary Baudoux (Watz) in Saginaw. He was a graduate of Swan Valley High School, class of 1999. Following high school, Lonnie honored our country in the United States Army for nearly 14 years. Four of which he served as a Tomb Guard.

On January 23, 2021 he married his long time friend, Angela Thomason (Pederson), their friends described their love as “epic”. Lonnie was hysterical; he had an amazing sense of humor, was very artisitc and nonetheless, he was incredibly smart too. He never did anything half way; he put his heart and soul into everything he did. Lonnie loved to cook, grill, hike, fish, golf, bike and relax in his hammock.

Lonnie leaves behind his wife Angela and her son Kyrian, along with his children, Leon Joseph Baudoux VI and Ginny Baudoux. His mother Mary Baudoux and sister Kimberly (Curtis) Sandifer also survive him as well as many loving family members and close friends.

He was predeceased by his father Leon Joseph Baudoux IV and his grandparents: Leon and Clara Baudoux and Dick and Grace Watz.

A funeral service will take place at 3:30 p.m. on Friday, June 4, 2021 at W.L. Case and Company (201 N. Miller Road, Saginaw). Rev. Ted McCulloch will officiate. Friends may visit with the family on Friday from 10:00 a.m. until 3:00 p.m. Military Honors will be rendered under the auspices of the United States Army and VFW post 7302. Honoring Lonnie’s wishes, cremation will follow the service. In lieu of flowers, those planning an expression of sympathy may consider memorial donations in Lonnie’s name to the PTSD Foundation of America (9724 Derrington Rd, Houston, TX 77064).
To order memorial trees or send flowers to the family in memory of Leon "Lonnie' Joseph Baudoux V, please visit our flower store.
Send a Sympathy Card