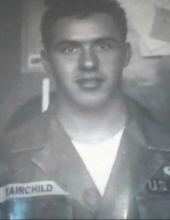 Beloved father, grandfather, great-grandfather, brother, and friend passed away peacefully with his family by his side on Tuesday, May 18, 2021, at Ascension – St. Mary’s of Michigan. He was 80 years old. Larry L. Fairchild was born on January 12, 1941, in Saginaw, Michigan, to the late Cyrus LaGrand and Amelia (Yurcso) Fairchild. He was a 1959 graduate of Saginaw High School. Following graduation, Larry proudly enlisted in the United States Army serving as a paratrooper with the 101st Airborne during the Vietnam War, receiving many awards and commendations until his honorable discharge. Upon his return, Larry began working as a truck driver at his father’s business, AC Garbage Service. In 1969, Larry, started his own company Tri-City Refuse Removal which he owned and operated until January 1, 1986. Larry continued to operate his affiliated company Fairchild Waste Control through December 2018. Following his retirement, Larry began the hobby of real estate investment. He was a member of the American Legion Post 22, the VFW, and participated in many Civil War reenactments throughout the country over the years. Larry had an innate ability to connect with all people and truly loved serving coffee and visiting with all the customers at Fuzzy’s. He was also an avid coin and antique collector. Larry will forever be remembered for his love and knowledge of history, his charisma and energy, and for the love he had for family and friends.

He was preceded in death by a brother, Stephen Fairchild; former spouse, Emma Katherine (White) Fairchild.

A Funeral Service will take place at 11:00 a.m. on Wednesday, May 26, 2021, at the W. L. Case & Company Funeral Chapel, 5700 Dixie Highway. Rev. Rob Richards will officiate. Military Honors will follow under the auspices of the United States Army and American Legion Post #22. Private burial will take place at Great Lakes National Cemetery. Friends are welcome to visit with the family at the funeral chapel on Tuesday from 1:00 p.m.4:00 p.m. and 6:00 p.m. to 8:00 p.m. and on Wednesday from 10:00 a.m. until the time of the service. In accordance with the Michigan Department of Health and Human Services ordinance, face masks are required, limitations on the number of those gathering will be observed, and social distancing encouraged. In lieu of flowers, those planning an expression of sympathy may wish to consider memorials to Vietnam Veterans Memorial Fund.

To order memorial trees or send flowers to the family in memory of Larry LaVern Fairchild, please visit our flower store.
Send a Sympathy Card