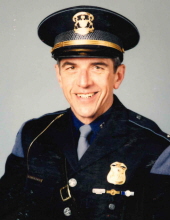 Kenneth Maciejewski of Saginaw, Michigan
Loving husband, father, and grandfather, passed away with his family by his side on Tuesday, February 8, 2022, at Covenant HealthCare – Cooper, at the age of 82 years. Ken was born on June 24, 1939, in Bay City, Michigan, the son of the late Alvin L. and Irene S. (Gerulski) Maciejewski. He was a graduate of both St. Stanislaus High School in Bay City and Michigan State University. Ken proudly served his country by enlisting in the United States Air Force, serving honorably for four years until his discharge. He married the love of his life, Judith G. Phelps on May 1, 1965; she survives him. Ken attended the FBI Academy in Quantico, Virginia. He worked with the Michigan State Police Department where he rose to the rank of Commander with the Caro, L’Anse, and Bay City Posts, retiring in 1992 after many years of dedicated service. Ken was instrumental in the planning, development, and building of the Bridgeport Crime Lab. He later began working with the Michigan Department of Corrections for 17 years as a probation and parole officer, retiring in 2008. Ken believed in serving other people and often volunteered at the Aleda E. Lutz VA Medical Center in Saginaw. He was a member of the P.L.A.V. Post #162 (Polish Legion of American Veterans) and American Legion Post #439. Ken was into physical fitness and health and enjoyed working out and running. He also enjoyed fishing, shooting with his grandchildren, and photography.
Surviving are his wife of 56 years, Judith; a daughter and son-in-law, Kenna and Robert Troutman; four grandchildren: Ryker, Kenton, Kailee, and Karis Troutman; sister-in-law, Terry Ann (Dennis) Gremel. Also surviving are several nieces.
A funeral service will take place at 11:00 a.m. on Tuesday, February 15, 2022, at REACH Community Church, 3111 Barnard Rd. His son-in-law, Robert Troutman will officiate with military honors to follow under the auspices of the United State Air Force and American Legion Post #439. Private burial will take place at St. Patrick Cemetery in Bay City. Friends are welcome to visit with the family on Monday, February 14, 2022, at the W. L. Case & Company Funeral Chapel, 4480 Mackinaw Road from 2:00 p.m. to 4:00 p.m. and 6:00 p.m. to 8:00 p.m. and at the church on Tuesday from 10:00 a.m. until the time of the service. Those planning an expression of sympathy may wish to consider memorials to the P.L.A.V. Scholarship Fund. Please share your thoughts and memories with the family at the funeral home, church, or through www.casefuneralhome.com.

To order memorial trees or send flowers to the family in memory of Kenneth A. Maciejewski, please visit our flower store.
Send a Sympathy Card