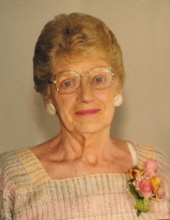 June I. McAnary of Merrill, Michigan

Beloved mother, grandmother and great grandmother, passed away peacefully the morning of July 3, 2021. She was 94. June was born in Chase, Michigan to Lloyd and Minnie Ringler on September 1, 1926. June was an accomplished student and graduated from Big Rapid High School. She was awarded a scholarship in chemistry her senior year. During June's time in Big Rapid she met Robert (Bob) McAnary when he was attending Ferris State. They were married October 10, 1948.

June worked ten years for Dow Corning until she retired. She is known for the strength of her character, determination and desire to do everything with excellence.

It was her desire to live independently in her home in Merrill until her death thanks to friends in Merrill who extended her help and kindness made this possible. She also was a sports fan especially of the Detroit Pistons, Detroit Lions, Green Bay Packers, Michigan State college basketball and football programs and Detroit Tigers. Nature lover, gardener of flowers and vegetables, she especially enjoyed birds. June was also an avid reader of information. An outstanding seamstress, June had many crafting skills like her artist Easter eggs hung on the yearly Easter tree. She was an active supporter of school, extra-curricular and sporting events at Merrill High School. Summertime with extended Ringler family visits in Lake County was always a summer highlight.

After retirement she was able to enjoy her eight grandchildren, especially the Jubilee in December organized by Denise and sisters, plus visits to Mt. Pleasant and the casino.

A funeral service will take place at 1:00 p.m. on Saturday, July 10, 2021, at the Congregation Church, 245 S. Midland Road, Merrill, Michigan. Pastor Richard Herman will officiate. Honoring June’s wishes cremation will follow. Friends are welcome to visit with the family at the church on Saturday from 11:00 a.m. until the time of the service. In lieu of flowers, those wishing to honor June’s life may donate to Jonesfield-Lakefield Township Fire Department. Please share your thoughts with the family at the church or through www.casefuneralhome.com.
To order memorial trees or send flowers to the family in memory of June I. McAnary, please visit our flower store.