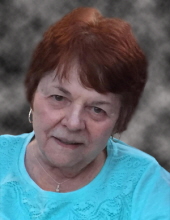 Judith passed away peacefully on Monday, December 21, 2020 at Union Court Assisted Living with her daughters by her side, at the age of 77 years. She was born to the late William and Hannah (Smith) Sheldon on March, 9, 1943 in Saginaw. Judith graduated from Arthur Hill High School and continued her education at Saginaw General School of Nursing where she graduated with her Bachelor’s Degree in Nursing. She graduated in 1964 and married the love of her life all in the same year. Judith married Henry Jagels on August 29, 1964 in Saginaw. He preceded her in death on November 27, 2015.

She and Hank enjoyed spending many years with great friends in Crystal River, Florida. Judy also enjoyed camping, playing bingo and crafting. She spent a lot of her time creating cross stitch and diamond art. Above all she cherished her time spent with her family and her grandchildren.

Honoring her wishes, cremation has taken place. A memorial service will be held at a later date. Those wishing an expression of sympathy may wish to consider Heart-to- Heart Hospice, or Union Court Assisted Living Facility.
To order memorial trees or send flowers to the family in memory of Judith Ann Jagels , please visit our flower store.
Send a Sympathy Card