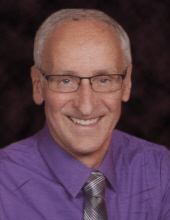 Joseph passed away peacefully after a long battle with ALS. He went to be with his Lord and Savior on Wednesday, December 30, 2020 at the age of 70 years. Joe was born on December 20, 1950 to the late Bruce and Patricia (Valliere) McQueen in Merrill, Michigan. Joseph was a graduate of Merrill High School, class of 1969. He served four years in the Army National Guard. Joe married Carla Wardin on October 11, 1975 at St. Peter Lutheran Church, Hemlock. They shared 45 years together.

Joseph was a lifelong member of St. Peter Lutheran Church; he served the church as trustee for 44 years. Joe was employed as an auto mechanic for many years at the Merrill Dealership. He continued his career as a mechanic working at home in his beloved garage. Joe cherished his 1955 Chevy truck and enjoyed working along side his “car buddy” Larry Engel. He also enjoyed hunting, especially with his sons, and brother in law Tom Wardin. Joe and Tom would travel to Edenville, Michigan for deer camp and also made several trips to Missouri for hunting as well. He enjoyed watching the Detroit Tigers, Detroit Pistons, and NASCAR. Joe will forever be remembered for his faith, strong work ethic and honest personality which he instilled in all of his children. He was always at his happiest when he was putzing around in his garage or mowing the lawn. His grandchildren will remember him for his famous pancakes (which were from a box).

He was predeceased by his mother and father in law Bonnie and Carl Wardin.

Joseph’s family would like to thank the staff at Masonic Pathways, Alma, where he spent the last three years. A special thank you to William and Maria, the assisted breathing unit, nurses, respiratory therapists, CNA’s, physical therapists, and speech therapists. Over the past three years the staff became part of the family.
To order memorial trees or send flowers to the family in memory of Joseph Thomas McQueen, please visit our flower store.
Send a Sympathy Card