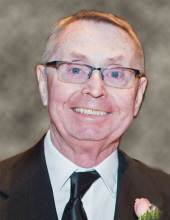 Beloved father, grandfather and servant of the Lord passed away on Tuesday, December 14, 2021 at St. Joseph Mercy Hospital, with his family at his side; at the age of 76 years.

The son of the late Arthur and Hannah (Struthers) Murphy, John was born on October 14, 1945 in Greenville, South Carolina, moving to Saginaw shortly after birth. He graduated from St. Paul Seminary High School where he was head sacristan and student body president. John then continued his education at St. Mary's University in San Antonio, Texas where he served as senior class president, graduating with a bachelor's degree in 1967. He then attended St. John's Seminary and the University of Detroit, where he received his master's degree in Theological Studies in 1970, and taught theology at Madonna University. He was ordained a Deacon in the Catholic Church in 1970, where he served in active ministry in Hemlock, Merrill, and Bay City Parishes until 1973. John found his spiritual home at St. Joseph Catholic Church, where he was a member and volunteered beginning in his early teen years. After his years of active ministry, he held executive positions at the Cystic Fibrosis Foundation, Tuffy Auto Service Centers, Mobility Centers Inc. and International Top Value Automotive for many years of loyal and dedicated service. John enjoyed playing hockey and racquetball, loved to read, and delivering meals for Saginaw County Meals on Wheels. Throughout his life he had a true passion for writing but above all, John cherished the time spent with his children and loved ones.

Funeral Liturgy will take place at 11:00 a.m. on Tuesday, December 21, 2021 at St. Joseph Catholic Church, 936 N. 6th Avenue, Saginaw, Michigan 48601. Rev. Fr. Jack Johnson will officiate. Friends may visit the family from 10:00 a.m. until the time of service on Tuesday at the church. Those planning an expression of sympathy may wish to consider memorials to St. Joseph Catholic Church.
To order memorial trees or send flowers to the family in memory of John P. Murphy, please visit our flower store.
Send a Sympathy Card