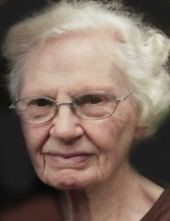 Joan Clark (Poulter) of Birch Run, was born in London, England on July 19, 1920. She was the only daughter of Harry and Alice Poulter. Once an adult, she worked as a telephone operator during World War II. She met Corporal Robert H. Clark over the telephone, having just arrived with the 887 MP Company, attached to headquarters 8th Air Force, who were stationed in town. They both kept in touch, by mail, after the unit left for Belgium and eventually back to the United States in 1945. Again, by mail, they kept their friendship, and a 1947 he asked Joan to come to the U.S. So in August of that year, she sailed from South Hampton to New York, then caught an overnight train to Detroit where Robert met her. They both drove back to his hometown of Saginaw, Michigan and was welcomed by his family. He told her that he had the chance to buy a small house and asked if she would marry him. She gladly agreed and they married a month later. They lived in Saginaw where in 1951, their only daughter Monica Sue was born.

She was predeceased by her parents, her only brother and sister-in-law, special first cousin Dorothy, and special second cousin John, wife Rita, and family. Not forgetting Robert, her best friend and wonderful husband and father.

One of her proudest moments was becoming a US citizen in 1961 and baptized in 1970 in the Baptist faith.

Those who wish to donate in Joan’s memory, may consider Tri-City Association for the Deaf in Saginaw, Michigan.

P.S. To all my many family, friends, please remember Joan in your thoughts and prayers. My love to all and God Bless everyone.
To order memorial trees or send flowers to the family in memory of Joan Clark , please visit our flower store.
Send a Sympathy Card