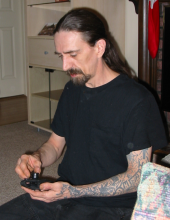 Beloved son, brother, uncle, nephew, and cousin passed away on Wednesday, July 7, 2021, at his home following a lengthy illness. He was 59 years old. Jesse Joseph Conn was born on August 25, 1961, in Phoenix, Arizona, to David Lee and Rita Jean (Newton) Conn. He was a gifted and talented painter, especially working with portraits and landscape painting. Jesse had a detailed, intricate, and mechanical mind and was able to fix anything no matter how complex it appeared. Jesse was a longtime gun enthusiast. Over the years he enjoyed target practicing with both his handguns and bow-in-arrow. He will forever be remembered for his selflessness to all he loved, his compassionate heart, and for loving everyone without conditions.

Friends are welcome to visit with the family at the W. L. Case & Company Funeral, 4480 Mackinaw Road on Friday from 12:30 p.m. to 2:30 p.m. Burial will follow at Roselawn Memorial Gardens. In lieu of flowers, those planning an expression of sympathy may wish to consider memorials to a charity of the donor’s choice.
To order memorial trees or send flowers to the family in memory of Jesse Joseph Conn, please visit our flower store.
Send a Sympathy Card