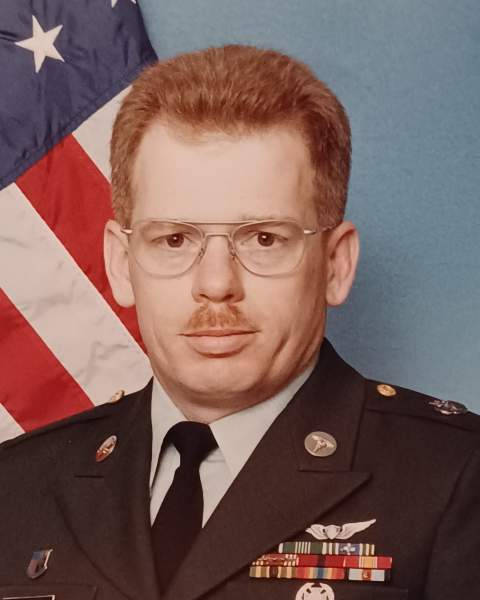 Entered into his Heavenly Home on Sunday, August 21, 2022, after a seven-year battle with Multiple Myeloma. Jerry was born on November 6th, 1956, in Saginaw, Michigan, to Donald Sr. & Janet (Brush) Emeott, and was a 1975 graduate of Swan Valley High School. He enlisted in the Marine Corps shortly after high school and served from 1976 until 1980 before enlisting in the Army that same year. Jerry met the love of his life Christine Haremski in 1984 through mutual friends and the two would be united in marriage on May 10th, 1986. She survives him. Jerry and Chris would travel the world together through his service in the Army, living in California, Washington State, and Germany, before settling down in his hometown of Shields with his wife & son after his retirement from the Army. He spent his free time golfing, camping, playing cornhole, cards, and horseshoes, and taking long bike rides. Most of all, he relished the time spent with the family that he held so dear to him. Jerry was a big kid at heart and could often be found playing with the little ones during family get-togethers. He was a jokester that showed his love through teasing and would do anything for anyone. Most of all, Jerry is remembered as being a man who never complained, but instead chose to cherish the time he had with his loved ones.

The family would like to give a special thank you to Dr. Malhotra, the Covenant Cancer Care Center, the University of Michigan Hospital, & the Saginaw Veteran’s Association Hospital.

Funeral services for Jerry will take place at 11:00am on Thursday, August 25th, 2022, at W.L. Case & Company Funeral Home, 201 N. Miller Rd. Saginaw, Fr. Peter Gaspeny presiding, with visitation at the funeral home on Wednesday, August 24th from 2:00pm-8:00pm, and from 10am until the time of service on Thursday. Cremation is to follow, with a private family burial at Great Lakes National Cemetery. Those wanting to make a show of their sympathy may wish to consider a memorial contribution to Covenant VNA – Hospice or the Covenant Cancer Care Center. Please share your thoughts, prayers, and memories with the family at the funeral home or through www.casefuneralhome.com.

To order memorial trees or send flowers to the family in memory of Jerry Michael Emeott, please visit our flower store.