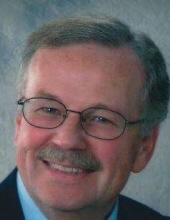 James "Jim" William Trew, age 73, of Saginaw, Michigan, passed away on March 6, 2022, shortly after a much anticipated visit with his children and grandchildren.

The son of the late Donald and Elaine (Wuelpern) Trew was born on August 23, 1948 in Saginaw, Michigan. He graduated from Arthur Hill High School in 1966, and went on to earn a Master's degree in Engineering from Lawrence Institute of Technology. Jim married Barbara Bach on February 28, 1976; she predeceased him on August 26, 1995. Jim worked at Miles Machinery before starting his own business, A-1 Insulation, in 1977 where, for over thirty years, he prided himself on taking no shortcuts and providing quality work. In his younger years, Jim enjoyed long walks, traveling in his RV, vacationing, particularly in Mexico, and hosting pool parties at his home where he would mix up toddies and do massive cannonballs in the pool. He was also a good cook and knew to never overcook the meat. Jim was extremely social, and found value in striking up conversation with just about anyone. He was a member of the Fordney Club, and the Sports Car Club where he raced his Datsun 240. Jim also enjoyed boating on the Saginaw Bay, where he burned out his engines multiple times driving his boat too fast. During his retired years, Jim loved day trading, and spending time with his grandchildren.

Funeral service will be held at 2:00 pm on Sunday, March 13, 2022, at W. L. Case & Company, 201 North Miller Road Saginaw. Friends may visit with the family from 12:00 pm until the time of service. Private burial will take place in Roselawn Memorial Gardens. Those planning an expression of sympathy may wish to consider the Parkinson’s Association.

To order memorial trees or send flowers to the family in memory of James "Jim" William Trew, please visit our flower store.
Send a Sympathy Card