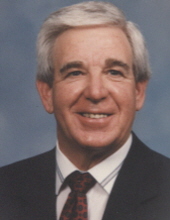 The son of the late James B. and Mary (Bush) Davy, Jim was born May 21, 1924, in Newberry, MI. He married Marian A. Hausman on September 12, 1946; she predeceased him on July 25, 2015. Jim proudly served in the US Navy during WWII on the USS Fullam. He retired in 1984 as a maintenance Supervisor at Nodular Foundry GM. Jim was an avid golfer.
Surviving are two children, James A. (Rosalie) Davy and Julie A. (Greg) Louks; three grandchildren, Lisa L. (Starling) Ervin, Robert L. Bush, and Amanda J. (Michael) Thomson; seven great-grandchildren, Dorian Quivers, Michael, Jalen, Isabella, Starling III Ervin, James and Christopher Thomson; a great-great grandson Dorian James Jr., sister, Mable (Galen) Grandy, and sister-in-law, JoAnn Housman.

The family would like to extend their gratitude to the staff of New Hope Valley, especially to Becky, who was such a friend to Jim.

A private burial will be held at Roselawn Memorial Gardens. Those planning an expression of sympathy may wish to consider Wounded Warriors or a charity of their choice.
To order memorial trees or send flowers to the family in memory of James "Jim" F. Davy, please visit our flower store.
Send a Sympathy Card