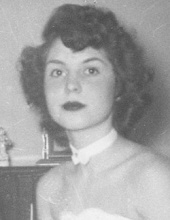 The daughter of the late John R. and Gertrude M. (Bradley) Sullivan, Jacqueline was born November 4, 1929 in Saginaw, Michigan. She was a graduate of Saginaw High School, Class of 1948, where she excelled in Track and Field. Jacqueline married George John “Jack” Storrs on July 7, 1956. He predeceased her on January 13, 1987. She worked for many years of loyal and dedicated service at Newman’s, Brick’s Furs and Beverly’s. She was devoted to her family sometimes to a fault. Jacqueline loved to share her views and opinions with anyone who would listen. She enjoyed talking daily to her childhood friend, Mary Lou or her sister-in-law, Dona. She loved Michigan and all of its sports teams, college and professional leagues. Above all, Jacqueline cherished the time spent with her family. She was her loving daughter Shelley’s “Biggest pain in her ass, but she was HER pain in the ass.”

The family would like to extend their appreciation to ProMedica Hospice (Formerly Heartland Hospice) for the exceptional care given to Jacqueline.

Honoring Jacqueline’s wishes, cremation has taken place. A Celebration of Life will be scheduled in the Spring. Funeral arrangements have been entrusted with W. L. Case and Company Funeral Chapel. Those planning an expression of sympathy may wish to consider memorials to ProMedica Hospice of Northeastern Michigan, 1320 Waldo Ave. Suite 300, Midland, MI 48642.
To order memorial trees or send flowers to the family in memory of Jacqueline (Sullivan) Storrs, please visit our flower store.