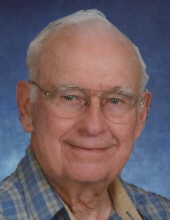 Jack Melvin Netzley, 90, of Saginaw, passed away peacefully on Friday, December 4, 2020. Born December 1929 in Coe Township, Isabella County, Michigan, he was the second son of Ray E. Netzley and Bernice Sharrar. He grew up on the family farm near Pleasant Valley, Midland County, Michigan. He graduated in 1948 from St. Louis High School, St. Louis, Gratiot County, Michigan.
Jack met his future wife, Dorothy M. Smith, at Brockway Roller Rink in Saginaw in 1951. They married in 1955 at Bridgeport Community Church in Bridgeport, Michigan.
He served (state side) in the US Army from August 1953 to June 1955 during the Korean War.
He worked at different times as a farmer, soldier and custom cabinetmaker. Jack retired in 1993 as a carpenter from General Motors-Malleable Iron in Saginaw.
He was a longtime member of Second Presbyterian Church where he served as a deacon, usher and member of the Presbyterian Men. Jack was a member of Saginaw Field and Stream and enjoyed hunting, fishing, camping and traveling.
Jack will be lovingly remembered by his wife of 65 years, Dorothy M. Netzley; three children: Lori L. (Robert) Saldivar of Charlotte, MI; Julie A. (Michael) Bemben of Grand Rapids, MI; James A. (Julie) Netzley of Cadillac, MI; three grandchildren: Jessica Netzley, Alex Netzley, Zachary Bemben; one niece: Brenda Siefka; two nephews: Keith Netzley and Mike Netzley.
Jack was predeceased by his parents, and brothers Alfred Netzley and Charles Netzley, all of St. Louis, MI and nephew Dan Netzley. A private family memorial service will be held December 10. A public memorial service to celebrate Jack’s life will be held at a later date. In lieu of flowers a donation can be made to the Presbyterian Men of Second Presbyterian Church, 2665 Midland Rd, Saginaw, MI 48603

Funeral for Mr. Netzley can be viewed at: here

To order memorial trees or send flowers to the family in memory of Jack M. Netzley, please visit our flower store.
Send a Sympathy Card