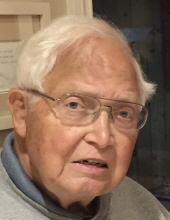 Jack was born in Saginaw, Michigan, on May 29, 1933, the youngest of seven children of Shirley and Bessie Alexander, and stepfather Arthur Hayward. During economic hard times in his early childhood, he and two brothers lived in St. Vincent’s Orphan’s Home in Saginaw, which contributed to his appreciation for the things in life many take for granted. In addition to being president of the Drivers Club in high school at Arthur Hill, Jack played both quarterback and linebacker on the football team. He was a starting guard on the class A state finals basketball team before going on to play collegiate basketball at Central Michigan University.

Jack married his high school sweetheart Sandra Meyer of Saginaw, Sept. 3, 1954. For 48 years, Jack and Sandy lived in Saginaw and raised children Mark, Lynn and Libby. One of Jack’s saddest memories was losing Mark to illness at the age of six.

Jack worked as a realtor at Meyer-Alexander Real Estate for 28 years before joining C.M.W. Real Estate in 1988. He became general manager and retired in 2007 at age 74.

Jack and Sandy moved to a lakeside cottage in Lake Ann, MI in 2007 where they lived for seven years enjoying the sunsets, wildlife, and family gatherings. Jack piloted their pontoon boat alongside Sandy and their first beloved Scottish Terrier, Duffy. Jack fully supported Sandy’s passion for antique collecting, and together they had a booth at the Mackinaw City Antique Show.

In 2014 Jack and Sandy moved to Traverse City to be closer to family. Jack always said Sandy’s passing in 2015 was the other most difficult thing in his life. He was able to connect with his community by delivering Meals On Wheels for three years to housebound seniors. He always checked in on their welfare and made them smile. Jack bonded with friends in a Senior Odyssey of the Mind group, going to state competitions with elaborate skits. Jack and his current Scottish Terrier and constant companion, Laddie, would often stroll the Traverse City Marina.

Jack always placed his family first. He was a truly selfless person. Jack led by example how he wanted his family to treat others, with kindness. He could also leave you giggling in the most ordinary situations. In the car with him going through a parking lot pay booth, you’d watch him tell the cashier, “I’ll have a hamburg and french fries, please!”

Jack most recently lived at the Glen Eagle retirement community in Traverse City, where he was well-known with his dog Laddie at his side. He always had a kind word for everyone and often a cheerful quip, endearing him to all. Jack and Laddie felt such love and compassion from the staff at Glen Eagle.

A private memorial will be held in 2021. In lieu of flowers, memorial contributions may be made to www.MealsOnWheelsAmerica.org in honor of Jack Alexander.

Condolences and memories are welcomed at www.casefuneralhome.com.
To order memorial trees or send flowers to the family in memory of Jack Alexander, please visit our flower store.
Send a Sympathy Card