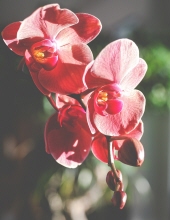 Beloved mother, grandmother and great-grandmother passed away on Thursday, March 17, 2022 at her home, with her family at her side; at the age of 85 years.

The daughter of the late Arvel and Daisy (Hampton) Likens, Honda was born on April 4, 1936 in Pontiac, Michigan. She married Robert W. Head; he preceded her in death. They both had a strong faith, were both missionaries and were politically active.

To order memorial trees or send flowers to the family in memory of Honda Mary Head, please visit our flower store.
Send a Sympathy Card