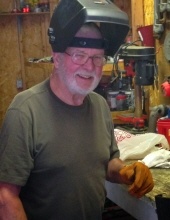 Beloved father, grandfather and brother passed away on Wednesday, May 19, 2021, at Covenant HealthCare – Cooper, with his family at his side; at the age 86 years.

The son of the late Richard Leroy and Dorothy Elizabeth (Ackerman) Tyson, Henry was born on June 18, 1934 in Saginaw, Michigan. He graduated from Arthur Hill Technical School. Henry served in the United States National Guard until he was honorably discharged. He married Janet Elizabeth Bauer on February 27, 1954; she preceded him in death on January 8, 2016. Henry retired from General Motors, Central Foundry after 27 years of loyal and dedicated service. He was a proud blood donor for many years. Henry enjoyed baseball, bowling, fishing, golfing, hunting and camping. Above all, Henry cherished the time spent with his family.

Surviving are his son, two daughters and their spouses: Vicky and Bob Bourland, Randy and Helen Tyson, Donna and Jim Paulson; eleven grandchildren; twenty-seven great-grandchildren, and five great-great-grandchildren; one sister: Ronda Ehlert; and his beloved dog: Daisy. Also surviving are many nieces, nephews, extended family members and friends. Besides his wife and his parents; Henry was preceded in death by two brothers: David Tyson, Richard Tyson Jr.; and a sister: Barbara Forbes.

A private funeral service will take place at W. L. Case and Company, 4480 Mackinaw Road, Saginaw, Michigan. A graveside service will take place at 3:00 p.m. on Tuesday, May 25, 2021 at Eastlawn Memorial Gardens. Military Honors will be held under the auspices of the United States Army National Guard and American Legion Post 22. Friends may visit the family from 2:00 p.m. – 4:00 p.m. and 6:00 p.m. – 8:00 p.m. on Monday, May 24, 2021 at W. L. Case and Company Funeral Chapel, 4480 Mackinaw Road, Saginaw, Michigan. In accordance with the Michigan Department of Health and Human Services ordinance, indoor capacity is limited to 25 persons, face coverings are required, and social distancing encouraged. We appreciate everyone’s efforts to reduce the spread of covid-19 in our community. Those planning an expression of sympathy may wish to consider memorials to a charity of your choice.
To order memorial trees or send flowers to the family in memory of Henry "Hank" Tyson, please visit our flower store.