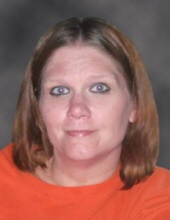 Heather Lynn Felker was born on January 24, 1972, she was unexpectedly called to eternal peace on Tuesday, May 11, 2021 at Henry Ford Hospital, Detroit at the age of 49 years. Her father, Robert Felker, embraced her with loving arms on the 11th anniversary of his journey home. Our hearts ache a little more and the tears fall more freely, but we are comforted that neither is alone.

Heather was a graduate of Merrill High School, class of 1990. She enjoyed listening to music, watching movies and crime shows. Heather was a stay at home mother, she cherished her time spent with her children and grandchildren.

Besides her father, Heather was predeceased by her grandparents Shirley and Ed Kalahar and her grandmother Vera Stephens.

Visitation for Heather will take place on Friday, May 14, 2021 from 4:00 pm until 7:00 pm at W.L. Case and Company (125 E. Saginaw Street, Merrill, Michigan). Honoring her wishes, cremation will take place after the service.
To order memorial trees or send flowers to the family in memory of Heather Lynn Felker , please visit our flower store.