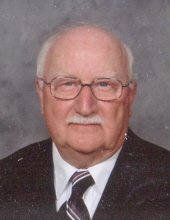 Gerald “Jerry” Edward Spiker
Saginaw, Michigan
Beloved father, grandfather and friend passed away on Friday, November 13, 2020 at Edgewood Assisted Living, with his family at his side; at the age of 90 years.
The son of the late Edward J. and Emma C. (Butzin) Spiker, Jerry was born on September 1, 1930 in Saginaw, Michigan. At the age of 3 years, the family moved to a 120-acre farm in Fremont Township, south of Hemlock, Michigan. Jerry graduated from Hemlock High School, with the Class of 1947. He married Lena Norene Finger on October 27, 1951 in Saginaw, Michigan; she preceded him in death on May 30, 1996. Jerry worked from 1947 – 1952 at Saginaw Steering Gear. He then served honorably from 1952 – 1958 in the National Guard, Company A, 125th Infantry Regiment, Michigan. Jerry also worked for General Electric Service from 1952 – 1958. He then was employed by Fisher-Flack for 31 years retiring in 1991. Jerry drove throughout the state of Michigan, at Avis Rental Cars at MBS International Airport for 17 years, retiring a second time in 2008. He was a long-time member of First Presbyterian Church, Saginaw, Michigan. Jerry loved to travel extensively throughout the United States and Canada. He enjoyed going to museums and vintage farm equipment shows, especially to see old farm tractors. Above all, Jerry cherished the time spent with his family.
Surviving are one daughter, two sons and their spouses: Janet and Ken Kurecka, Saginaw, Michigan; Michael Spiker, Charlotte, Michigan; James and Michelle Spiker, Howell, Michigan; five grandchildren: Colleen Kurecka, Dearborn, Michigan; Chris Spiker, Mark Spiker, both of Charlotte, Michigan; Jamie Spiker, Detroit, Michigan; Samuel Spiker of Howell, Michigan; Also surviving are many nieces, nephews, cousins, and extended family members. Besides his wife and his parents, Jerry is preceded in death by his daughter-in-law, Mary in 2005 and his companion, Ruth Norton.
Honoring Jerry’s wishes, cremation has taken place. A committal service will be announced at a later date at Eastlawn Memorial Gardens. Pursuant to the current state orders indoor building capacity is limited, face masks are required, and social distancing encouraged. We appreciate everyone’s efforts to help stop the spread of covid-19 in our community. In lieu of flowers, those planning an expression of sympathy may wish to consider memorials to a charity of your choice.
To order memorial trees or send flowers to the family in memory of Gerald "Jerry" Edward Spiker, please visit our flower store.
Send a Sympathy Card