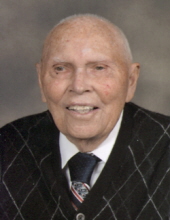 Beloved father, grandfather, and great-grandfather passed away peacefully on Tuesday, April 27, 2021, at Covenant HealthCare – Harrison. He was 99 years old. George Schmidt was born on March 20, 1922, in Saginaw, Michigan, to the late Martin and Elizabeth (Brumm) Schmidt. He graduated from the former Arthur Hill Tech High School. On April 9, 1940, George proudly enlisted in the United States Navy serving during World War II in the Pacific Theatre. He was a survivor of both the attack on Pearl Harbor and the Battle of Guadalcanal, where upon his honorable discharge on April 14, 1946, George received many awards and commendations, including the Pearl Harbor Commemorative Medal presented by Congressman Bob Traxler in 1991. While stationed in San Francisco, he met and married the love of his life, Margaret L. Smith on April 17, 1944, in San Francisco; she preceded him in death on February 12, 2004. George later married Jeanie M. Young-Schmidt on April 15, 2011; she preceded him in death on February 16, 2017. He worked as a patternmaker and a supervisor with General Motors for over 39 years. George was a longtime and faithful member of St. Paul Lutheran Church. He was also a lifetime member of the Pearl Harbor Survivors Association, Inc. In his spare time, he enjoyed playing golf and woodworking.

He was preceded in death by his son, Robert G. Schmidt in 1976, two grandsons: Martin William Schmidt and David Martin Schmidt; and four brothers and one sister.

A funeral service will take place at 12:00 p.m. on Thursday, May 6, 2021, at St. Paul Lutheran Evangelical Church, 1020 Court Street. Rev. Julius Buelow will officiate. Burial and Military Honors will follow at Roselawn Memorial Gardens under the auspices of the United States Navy and American Legion Post #439. Family and friends may gather at the church on Thursday from 10:00 a.m. until the time of the service. In lieu of flowers, those planning an expression of sympathy may wish to consider memorials to St. Paul Lutheran Church. Please share your thoughts and memories with the family at the church or through www.casefuneralhome.com.
To order memorial trees or send flowers to the family in memory of George Schmidt , please visit our flower store.
Send a Sympathy Card