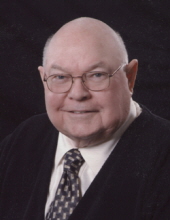 Frank Cartie Carlson (Jack)
Merrill, Michigan
Passed away Monday, December 27, 2021, at Merrill Fields Assisted Living. Age 90 years.
The son of the late Thurston Carlson and Selma Sally (Cartie) Weichman was born December 15,1931 in Aitkin, Minnesota. He graduated from St. Andrews High School, Saginaw, where he played on the State Championship Football Team for two years. He married Carol Ann Siler, January 8, 1955. His wife of 66+ years survives him. Frank served with the U. S. Army during the Korean War. He was employed by Shay Water and Beverage before owning and operating his own trucking company, retiring in 1985 with 18 years of service. After retirement he was employed by Sacred Heart Church as custodian and in the office of Searles Pressure Washers. Frank was a member of St. John XXIII Parish, Sacred Heart Church, Merrill, sang in the church choir; a member of the Knights of Columbus, Fr. Neuman Council #2291. He served on the Village of Merrill Council and was a member of the 1974 Schwind and Kalahar Men’s State Championship Bowling Team.
Surviving besides his wife, Carol, are six children and their spouses, Gail and Gary Woodworth; Diane and Dave Reiber; Mike and Jennifer Carlson; Mark Carlson; John and Jeanette Carlson; Amy and Fred Cizauskas; fifteen grandchildren; seventeen great grandchildren; a brother and two sisters, Harold Carlson, Mary Jayne Chuba and Bonnie Rae; several nieces and nephews. A brother and a great grandson have also predeceased him.
The funeral liturgy will take place at 11:00 a.m. Thursday, December 30, 2021, at St. John XXIII, Sacred Heart Church, Merrill. Rev. Michael F. Steltenkamp will officiate with Military burial in Sacred Heart Cemetery under the auspices of the Hemlock-Merrill V.F.W. Post #7302. Friends and family may visit at the church from 9:00 a.m. Thursday until the time of the funeral liturgy. Those planning an expression of sympathy may wish to consider the Alzheimer’s Association or St. John XXIII Parish, Sacred Heart Church. www.casefuneralhome.com
To order memorial trees or send flowers to the family in memory of Frank (Jack) Cartie Carlson, please visit our flower store.
Send a Sympathy Card