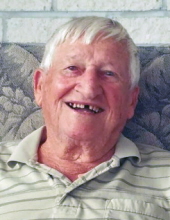 Frank Wisniewski of Saginaw, Michigan, formerly of St. Charles, Michigan. Beloved father, grandfather, brother, and uncle passed away on Friday, December 11, 2020 at Covenant Hospital in Saginaw, Michigan. He was 96 years old. Frank was born on November 4, 1924 to the late Frank and Anna (Kys) Wisniewski. He proudly served his country in the Army during World War II in the South Pacific and Japan, receiving several awards and commendations. He married Edith Elaine Erskine on July 31, 1948 in Hemlock, Michigan; she preceded him in death. Frank was employed as a welder with Baker Perkins, retiring after many years of service. He was a member of Knights of Columbus #4232 of Saginaw and Sts. Peter and Paul Church of Saginaw. He enjoyed spending time with his family, camping, traveling, woodworking, fixing things, hunting, fishing, playing baseball, dancing, and most of all, being a devoted husband to his beloved Edith. He will be missed for his kindness, wonderful smile and cheerful attitude.

A private family committal service will take place at Oakwood Mausoleum. Fr. Steve Gavit will officiate. Military honors will be rendered under the auspices of the United States Army and VFW Post 7302(Hemlock/ Merrill). In lieu of flowers, those planning an expression of sympathy may wish to consider memorials to the American Heart Association, American Stroke Association, or the American Cancer Society.
To order memorial trees or send flowers to the family in memory of Frank J. Wisniewski , please visit our flower store.
Send a Sympathy Card