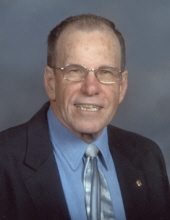 Born in Bramen, Oklahoma, he grew up in the small Kansas farm town of Hoisington, where he starred on the basketball and football teams and also met his future wife. The two high school sweethearts married in 1954. After working in the oil fields in Colorado, he talked his way into Kansas Wesleyan University and then started a long career with the YMCA. Starting at the YMCA in Salina, Kansas, he moved his then-young family to Saginaw, Michigan, where he worked for 33 years at the Saginaw Y. He was named Maverick of the Year in 1974 and launched new fitness programs and an ambitious building campaign, bringing in new members and building a strong volunteer program. He pursued a life of fitness, playing handball and golf, leading regular fitness classes, and sharing that love and competitive spirit with his children. His three children all worked at the Y as teens, and nothing made him prouder than his son and later his granddaughter following in his footsteps in YMCA work after college.

An avid sports fan, he adopted the Michigan sports teams as his own. The best thing about his youngest daughter attending the University of Michigan might have been the football season tickets that he enjoyed for years, flying Michigan flags down Rt. 23, and tailgating before games.

Gene always found time to play catch or cards or attend school events. He cherished family time, spending summers camping Up North and sailing on the Jayhawk, winter weekends at Camp Timbers cross-country skiing, and taking family vacations all over the United States. He had many memorable family vacations, from seeing the Grand Canyon and Mount Rushmore with his family of five, to sailing in Canada with his wife, son, and two of his granddaughters. One of the most memorable vacations was spending his 50th wedding anniversary with his wife, children, and grandchildren in Destin, Florida. Gene and Glenna made Destin their winter home for several years, enjoying the warm weather and special visits from family.

Together with his wife, he laid a foundation for his family, demonstrating the importance of hard work, enjoying dinners as a family, and encouraging all of his children to pursue higher education. When his son, Cory, fell ill with cancer, he and Glenna stepped in to help Cory through treatment and raise Cory's two daughters, forming a special bond with his granddaughters.

He was also active in his community, serving as a trustee and a long-time usher at State Street United Methodist Church and starting a Neighborhood Watch chapter. Age didn't slow him down; in his 80th year, he and Glenna started a tradition of sharing a meal with 80 people, meeting up with old friends and making new ones.

Above all, Gene was a man of faith who cared for his family and community. We will always love and miss him.

He is survived by his wife, Glenna, of 66 years, his two daughters, Carina Kracko (Ken) of Houston, Texas, and Kirsten Mummert (Mark) of Millersville, Maryland, his grandchildren, Aaron, Natalya, Nathan, Mikayla, Cassie, Cayla, and Kaitlyn, and his bonus grandchildren, Robert and Brian. He is preceded in death by his son, Cory, his sister, Goldie, and his parents, William and Arleetia, and his favorite brother-in-law, Romer Stafford.

In remembrance of Gene’s life, the family asks that donations be made to the Saginaw YMCA or your favorite charity.
To order memorial trees or send flowers to the family in memory of Eugene "Gene" Ellis Sheets, please visit our flower store.
Send a Sympathy Card