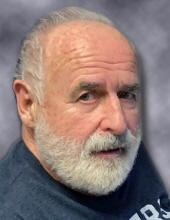 Beloved father, grandfather, great-grandfather and brother passed away on Sunday, October 3, 2021 at Toni & Trish House, with his family at his side; at the age of 79 years.

The son of the late Gilford and Arlene (Klemmer) Amy, Ervin was born on October 6, 1941 in Saginaw, Michigan. Ervin started out working at Mile's Machinery. He then went into the skilled trades and was a machine repairman at Saginaw Steering Geer, later Delphi. Ervin retired after many years of loyal and dedicated service. He was a member of the Alano Club and Alcoholics Anonymous. Ervin enjoyed farming, fishing and hunting; especially bear hunting in Alaska. He was a prankster and Ervin will be remembered for his sense of humor and wit.

A private burial will take place at Roselawn Memorial Gardens. Funeral arrangements have been entrusted with W. L. Case and Company Funeral Chapel. Those planning an expression of sympathy may wish to consider memorials to Toni & Trish House, 4699 11 Mile Road, Auburn, Michigan 48611.
To order memorial trees or send flowers to the family in memory of Ervin Allen Amy Sr., please visit our flower store.
Send a Sympathy Card