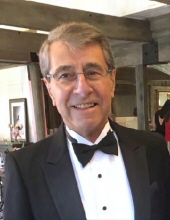 The son of the late Edward and Edith (Gilli) Quinn was born September 01, 1937 in Plymouth, Massachusetts. After spending his youth in New Britain, Connecticut, he enlisted in the United States Navy in 1954, at the age of 16. He proudly served from 1954 to 1958, stationed at NAS Oceana in Norfolk, Virginia, where he filled roles in hydraulics and metal work. While on leave, he met the love of his life, Jean Heckel, while she was vacationing in Virginia Beach. Edward and Jean married on April 18, 1959.

Ed and Jean moved to Youngstown, Ohio in 1960 for Ed to attend Youngstown State University. He was a member of Tau Kappa Epsilon fraternity where he served as Vice President. Ed and Jean were quite involved in campus life. Ed served as Advertising Editor of the school newspaper, worked for the Registrar’s Office, and was named all-campus “Mr Popularity” in 1963. Friendships that Ed and Jean made at Youngstown have spanned a lifetime. He graduated with a Bachelor’s Degree in Business Administration, with a focus in Accounting, in 1964, the same year that Ed and Jean welcomed their first of four children, Lauren.

Ed began his career working at a CPA firm in the Youngstown area. He was then hired on at the Packard Electric Division of General Motors in the financial staff in Warren, Ohio. Ed and Jean welcomed their second and third children, Ned and Michelle. In 1969, Ed and Jean moved to Troy, Michigan where he joined the Central Office Corporate Financial Staff of General Motors in the Detroit area. Establishing himself as the consumate professional with high work ethic and an eye for the details, he moved up the ranks in General Motors. In 1978, Ed and Jean moved to Saginaw, Michigan where Ed joined the Central Foundary Division as Assistant Comptroller. That year was a big year – they also bought their cottage in Lake George, Michigan and celebrated the birth of their fourth child, Jeffrey. He retired from his position as Assistant Comptroller with Saginaw Steering Gear in 1993. Through his career, he met many colleagues that became lifelong friends.

In 1982, Ed and Jean, with co-owners J.D. and Pat Mallery, began their business – the Antique Warehouse – in Saginaw, MI. Ed utilized his accounting expertise in doing the books. He loved working with customers, developing relationships with the dealers, and, most of all, fixing and restoring antique lighting. His work ethic always evident, Ed always stayed busy in the Warehouse and was known as the “Lamp Man” to customers and friends. When Ed and Jean traveled together, they shared a love for visiting antique shops and restoring unique pieces. Ed and Jean are members of the Saginaw Valley Antique Society.

Ed took many opportunities to stay in touch and enjoy life with family and friends. He beamed with pride for his 4 children and 6 grandchildren – Andrew, Tyler, Christine, Austin, Quinn, and Kyle – traveling to Grand Rapids, New York, and California to spend time with all of them. The Quinn family joined good friends, the Rankins, for a 40 year tradition of taking a ski trip up north in Michigan during the time between Christmas and New Years. Many good times were spent at the Quinn cottage in Lake George, MI, including a 15 year tradition of hosting an end-of-season “Soup Party” for friends and neighbors. Ed and Jean also enjoyed being “Snow Birds” for the last 27 years traveling south to New Smyrna Beach for the winter months. Ed enjoyed golfing, especially with his two sons and many golfing buddies, including the Pollari and Sippola families and the “Three Good Guys.” He participated in leagues in Michigan and Florida. Ed’s favorite things included banana nut bread, pasta, classic cars, relaxing and watching golf, organizing his tool chest, collecting antique barber bottles and BB guns, pontoon rides on Lake George, and traveling with Jean. Ed and Jean were members of Peace Lutheran Church for 42 years. He was the best husband, dad, father-in-law, Papa, and friend that anyone could ever have.

He was predeceased by his brothers, John and Thomas, sisters, Mary and Edith, and mother-in-law, Laura Heckel.

In his last days, Ed expressed tremendous appreciation for the care he received from various healthcare staff. In particular, the family would like to thank the nurses at the Covenant Harrison ICU, Lynn and Amy, for supporting Ed and the family through Ed’s medical needs.

A funeral service will be held at 11:00 am on Saturday, February 19, 2022, at Peace Lutheran Church, 3427 Adams Avenue, Saginaw. Rev. Matthew Hauser will officiate. Honoring Edward's wishes cremation will take place following services. Friends may visit with the family from 4:00-7:00 pm on Friday, February 18, 2022, at W. L. Case and Company, 4480 Mackinaw Road, Saginaw, as well as at the church on Saturday from 10:00 am until the time of service. In lieu of flowers, memorials may be made to Peace Lutheran Church or Castle Museum of Saginaw County History.

Funeral service will be lived streamed, please use either of the following links to view the live stream

To order memorial trees or send flowers to the family in memory of Edward John Quinn, please visit our flower store.
Send a Sympathy Card