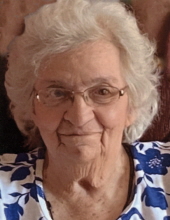 Passed away on December 8, 2020, peacefully with her son by her side at age 90. She was born June 5,1930 to Goldie and Emil Colpean and was named the most beautiful baby in Saginaw County of 1930. At a young age, Donna contracted polio. She was very proud to be a survivor. Donna was raised by Charles and Edna Chase until at the age of 17, she met the love of her life, Lyle Honaman. Donna & Lyle were married for 45 years when he passed in 1993. They attended the Lakefield Wesleyan Church and made a life together on the Honaman Centennial Farm.
Donna enjoyed helping with the farm. She spent many years hoeing the fields, preparing large meals with her sister-in-law's for Lyle and his brothers. She would giggle about driving Lyle's truck around the farm. She would keep his car washed up in later years. She enjoyed gardening, keeping her flower beds weeded and chasing the darn birds away.
Donna would spend her later years playing with her great-grandkids, could work a crossword and Sudoku book and was a puzzle whiz. She was known for her homemade pickles, elephant ears, noodles, popcorn balls & boiled dinners. Her favorite thing to do was spoil her family.
Donna is survived by her son and his wife, Ron and Sue Honaman. Son-in-law, John Johnson. Five grandchildren, Brent (Brandi) Johnson, Crystal (Jeremy) Scott, Stacy (Brandon) Fink, Brandon Johnson & Craig Honaman. Seven Great-Grandchildren, Ellie, Chloe, Kyle, Noah, Logan, Dylan & Lilly. Three siblings, Robert Colpean, Jack (Delilah) Colpean &. Patsy (Jim) Lippert. Sister-in-laws, June Honaman, Ruth Honaman & Carol Mitchell. Brother-in-laws, Joe Benkert & Robert Burgess. In addition to her parents she was predeceased by her only daughter, Linda Johnson, in-laws, Fred & Carrie Honaman, siblings, Edward Colpean, Sally Burgess, William Colpean, Christine Benkert & Duane Chase.
Funeral service will take place at 1:00 p.m. Saturday, December 12, 2020 at Merrill Wesleyan Church, 3765 N Chapin Rd, Merrill, MI with burial at Lakefield Township Cemetery. Friends may visit with the family at church on Saturday from 11:00 a.m. until the time of the funeral service. Those planning an expression of sympathy may wish to consider the Jonesfield-Lakefield Fire Department or Merrill Wesleyan Church. Pursuant to the current state orders, masks are required and social distancing to be practiced.
To order memorial trees or send flowers to the family in memory of Donna Jean Honaman, please visit our flower store.
Send a Sympathy Card