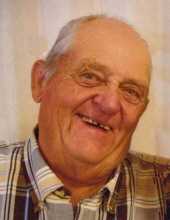 David Roy Hoffmann was born on October 6, 1939 to the late Roy and Marguerite Hoffmann. As he grew, his parents cultivated in him a strong love for working the earth and raising a harvest.

Dave met the love of his life, Mary Jane Taylor, on July 4, 1961. They exchanged vows four months later on November 4, 1961 and set about growing a life together. Along with Dave’s brother and Mary’s sister, Lee and Barb Hoffmann, they operated Hoffmann Brothers Farms on Dixie Highway in Bridgeport. As the business grew, so did the family: Dave and Mary had three daughters and also had nieces and nephews close by.

After many seasons on the big farm with their siblings, Dave and Mary transplanted their life into a house with several acres in Bridgeport Township. There, they continued working the ground together for more than 30 seasons, selling produce and flowers at a roadside stand and local farmer’s markets, where he was lovingly known as “The Flower Man”. Dave took special pride in the yield from their garden and loved seeing others get enjoyment from it, too. He found joy in having some of the first local sweet corn each summer, and his flowers routinely graced the altars of several area churches.

Dave was a familiar face around the community. He was employed at Tay Ban Landfill and Bridgeport Township Waste Water, where he was well known for his humor. He was a regular at the morning coffee group at McDonald’s, where he enjoyed exchanging stories with the guys and catching up on the latest happenings in the area.

In November 2021, Dave and Mary celebrated 60 years of marriage as they brought in the harvest from their 60th year of farming together.

On May 3, 2022, Dave heard his Master say, “Well done, good and faithful servant,” as Jesus called him to enter into rest after a full and fruitful life. The writer of Ecclesiastes reminds us, "For everything there is a season, a time for every activity under heaven. A time to be born and a time to die. A time to plant and a time to harvest. A time to cry and a time to laugh. A time to grieve and a time to dance." Dave left the seasons of earthly sowing and reaping and has begun the eternal season of joy and peace in the presence of his God.

Besides his parents, Dave is greeted in Heaven by sisters Doris Fowler and Evelyn Knoll and brother John Hoffmann.

A funeral service will take place at 11:00 am on Friday, May 6, 2022, at W. L. Case & Company, 5700 Dixie Hwy, Bridgeport, Michigan. Pastor Karl Griffiths will officiate with burial to follow in Pine Grove Cemetery. Friends may visit with the family from 1:00 pm – 8:00 pm at the funeral chapel on Thursday, May 5, 2022, as well as from 10:00 am until the time of service on Friday. Those planning an expression of sympathy may wish to consider Lighthouse Baptist Church or Wellspring Hospice of Frankenmuth.

To order memorial trees or send flowers to the family in memory of David Roy Hoffmann, please visit our flower store.
Send a Sympathy Card