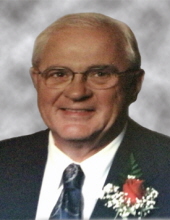 David passed away peacefully surrounded by his family, following a lengthy illness on Wednesday, January 27, 2021 at the age of 78. He was born on May 8, 1942 to the late Julius and Christine (Brassem) Peitsch in Saginaw. David graduated from Arthur Hill High School, class of 1960. He continued his education at Saginaw Valley State University earning a Bachelor’s in Business Administration where he studied Accounting and History. David married Trudy Bushong on October 6, 1962 at St. Stephen Catholic Church.

In 2002, after 42 years of service, David retired from Eaton Corporation where he was employed as a Controller. He was a member of St. Thomas Aquinas Catholic Church. David enjoyed watching college football and spending ample amounts of time with his family, especially his grandchildren. He was a loving husband and best friend to Trudy for 58 years.

He was preceded in death by his brother Julius Peitsch and sister Norma Russell.

A funeral liturgy will take place at 10:30 am on Tuesday, February 2, 2021 at St. Thomas Aquinas Catholic Church (5376 State Street, Saginaw). Fr. Richard A. Bokinski will officiate. Burial will follow at St. Andrew Catholic Cemetery. Friends may visit with the family on Sunday, January 31, 2021 at W. L. Case and Company (201 N. Miller Road, Saginaw) from 2:00 pm until 6:00 pm and from 9:30 am until the time of the service on Tuesday at church. Due to the world wide health pandemic building capacity is limited, face coverings are required and social distancing will be encouraged. Those planning an expression of sympathy may wish to consider memorials to the Saginaw Rescue Mission, St. Jude Children’s Research Hospital, Shriners Hospitals for Children or St. Thomas Aquinas Catholic Church.
To order memorial trees or send flowers to the family in memory of David Peitsch, please visit our flower store.
Send a Sympathy Card