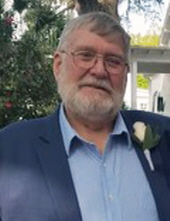 Dan Walling was a builder.

He was also big, bold, loud, and loving. He laughed, swore, and loved taking long drives down dirt roads to nowhere in particular.

But mostly he was a builder. He built barns, sheds, decks, and houses. With his wife Colleene of 53 years he built a home and family. She was beside him as he died peacefully on January 1, 2021. He was 73.

Daniel Curtis Walling was a hard-working man who loved Willie Nelson and hated asking for directions. He was born to Norbert F. Walling and Margaret Osmer Walling in Flint on April 2, 1947 and graduated from Flushing High School in 1965. He met Colleene Kay Burleson while camping in Traverse City and would spend the rest of his life loving her and camping, in that order.

Dan served in the 6th Army Military Police starting in 1966, stationed at The Presidio in San Francisco. He married Colleene a year later, and when he was discharged from the Army in 1968 they returned to Michigan and eventually settled in Clio. They would raise five children in a great big beautiful house Dan built on Farrand Road - a house that would later become the trigger of a famous family-drinking game given its frequent reference in almost every Walling story.

Dan spent most of his adult life as an entrepreneur, owning and operating Daniel Walling Builders for nearly 20 years. He and Colleene sold their home on Farrand Road (Drink!) and moved to Florida in 1996 to be near their grandchildren. Dan would spend the next decade of his life complaining about the heat and traffic. They returned to Michigan in 2006 and settled in Saginaw where he enjoyed semi and not-so-semi-retirement until suffering a series of strokes in November 2019.

But those strokes met their match in Dan Walling. The damage to his mind and body was severe, but couldn’t put a dent in his famous stubbornness. A lesser man might have lasted a few months. Dan lasted almost 14.

In his final days and weeks he seemed determined to outlive 2020. He battled COVID-19 and numerous infections, but refused to quit. When 2020 eventually passed, Dan followed suit a few hours later. A known Euchre cheater, it is believed to be the first time Dan followed suit in almost 20 years.

He is also survived by his mother, Margaret Mattson; sisters, Janet Walling and Frann Parker; and brother, Michael Walling (Judy), all of Flushing. Brother-in-law, Paul (Kathleen) Burleson of Cross River, NY and great friends, Ed and Carol Nerychel of Cedar, MI; as well as many nieces, nephews, friends, co-workers, and campers.

He was preceded in death by his father Norbert.

In lieu of flowers, his family is asking you to play your favorite Willie Nelson song and turn it up real loud for Dan so he can hear it as he sits by the campfire with God.

To order memorial trees or send flowers to the family in memory of Daniel "Dan" C. Walling, please visit our flower store.
Send a Sympathy Card