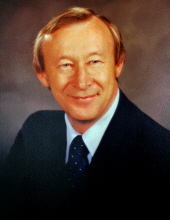 Beloved father, grandfather, great-grandfather, brother, and friend passed away peacefully at his home with his family by his side on Saturday, January 30, 2021. Dale William VanWormer was born on November 22, 1931, in Bridgeport, Michigan, to the late William T. and Petronella M. (Kwaiser) VanWormer. He was a 1950 graduate of Saginaw High School. Following graduation, Dale proudly served his country in the United States Army. He married Joan Grace Demo, the mother of his children, on August 17, 1957; she survives him. He later married his longtime companion, Judith A. Scott, on March 25, 1997; she preceded him in death on April 21, 2003. Dale was a lifelong and loyal employee with Consumer’s Power Co, dedicating over 40 years of his professional working career to the company. He was an avid outdoorsman, finding peace and solace in fishing and golfing, and true happiness in hunting. Above all, he treasured and cherished his family and friends. He will forever be remembered for selflessness, love and generosity, his laugh and excellent sense of humor, and for truly being one the kindest and remarkable men one could ever meet.

He was preceded in death by a brother, Duane R. (Eunice) VanWormer.

Military Honors and a private graveside service will take place at Eastlawn Memorial Gardens under the auspices of the United States Army and American Legion Post #439. A celebration of Dale’s life will take place at a later date. In lieu of flowers, those planning an expression of sympathy may consider memorials to Heartland Hospice or a veteran’s organization of your choice. Please share your thoughts and memories with the family through www.casefuneralhome.com.
To order memorial trees or send flowers to the family in memory of Dale William VanWormer, please visit our flower store.