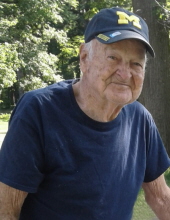 Beloved husband, father, grandfather and brother passed away on Friday, November 5, 2021, at the age of 95. Dale was born on October 15, 1926, in Lakefield Township, Michigan, to George and Hazel (Dunham Clark) Wenzel. A graduate of Merrill High School in 1944, he entered active duty in the Navy on November 14, 1944. He served on the USS Delta as a Radioman Third Class, one of many anchored in Tokyo Bay on September 2, 1945, to observe the Japanese surrender ending WWII. Returning from the war, he married Mary Ellen Fischer on June 19, 1948, at First Presbyterian Church. They lived in Saginaw until 1990, moving to Tawas City in Arenac County. He was a member of First Presbyterian Church and a charter member of the Tawas Area Presbyterian Church.

As a young man, he loved to play sports, excelling at basketball and baseball, especially playing at Wenzel Park with his brothers. He was an avid hunter and fisherman for many years, taking up golf in his later life which became his new passion. In his later years, he spent his time tending to the garden of gladiolas he planted for his wife Mary.

Surviving are two sons, Keith D. Wenzel of Tawas City and James L Wenzel and his spouse Sylvia Nelson of Prince William County, VA; two granddaughters, Melissa Wenzel and son-in-law Timothy Frisch of Minnesota and Laura Wenzel of Virginia; and 5 of his brothers. Also surviving are many nieces and nephews.

He was preceded in death by his wife Mary and his son Dennis Wenzel.

A private funeral service for immediate family will take place at the W. L. Case & Company Funeral Chapel, 201 N. Miller Road. Pastor Kathleen Rowe will officiate. Private burial will follow in Roselawn Memorial Gardens. Due to current Covid transmission issues, visitation will be limited to immediate family members. In lieu of flowers, those planning an expression of sympathy may wish to consider memorials to the Tawas Area Presbyterian Church.
To order memorial trees or send flowers to the family in memory of Dale Elbert Wenzel, please visit our flower store.
Send a Sympathy Card