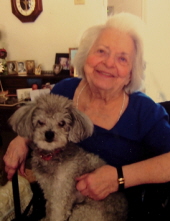 Drouillard, Clare Louise, R.N.
San Antonio, Texas
Former resident of Saginaw, Michigan, died peacefully at her home in San Antonio, Texas, May 9, 2022 at the age of 97 years. She was born February 25, 1925, in Cleveland, Ohio, to the late Theresa Marie (Pfeil) and George J. Ockuly.
Clare attended Notre Dame Academy in Cleveland and St. John Hospital Nursing School in Cleveland, earning an R.N. degree. After completing nursing studies, Clare worked at St. John as a pediatric nurse, caring for children with polio who were treated in iron lungs. She married Alfred C. Drouillard, February 1, 1947, in Cleveland, Ohio. He predeceased her on November 3, 2006. Clare was employed by St. Mary Hospital, Saginaw, Michigan, as a pediatric and obstetrics nurse for many years where she cared for young children and new mothers. During the huge winter storm of 1967, she was transported to the hospital on snowmobile by a fellow worker when the roads were impassable. She also worked at Saginaw General Hospital and the Veterans Administration Hospital.
All of her neighbors in Saginaw, and later Saginaw Township, knew of Clare’s nursing abilities. Many times, someone would come to the door asking for her help when an elderly person collapsed, a child was hit by a car, or a child got injured while playing. She gave first aid and comfort to anyone who needed her care. She also spent several summers acting as camp nurse, “Oak,” at Camp Oak Hills Girl Scout Camp in Harrison, where she doled out many Hershey bars to homesick campers. Nursing was her first love.
Clare was a member of St. Stephen Catholic Church in Saginaw, Sacred Heart Catholic Church in Oscoda, Michigan, and Holy Spirit Catholic Church in San Antonio, Texas. When she was no longer able to attend Sunday Mass, the good ladies of Holy Spirit lovingly brought her the Sacrament each week. Clare was also a member of the Saginaw Bay Yacht Club, the Saginaw Country Club, the Bridgeport Country Club, and the Germania of Saginaw, and more recently, The Club at Sonterra in San Antonio. While living in Saginaw, she was a member of Junior Women’s Club, the Saginaw Art Museum, St. Mary Hospital Auxiliary, and Abortion Alternatives. Clare was an avid bridge player, golfer and knitter.
Surviving Clare are her six children: Richard C. Drouillard, Warren, Michigan; Therese-Marie (David, Jr.) Oeming, Freeland Michigan; Margaret Mary (John) Emley, Bay Harbor, Michigan; Jeanne Marie (George) Lawrence, Lansing, Michigan; Lawrence Ockuly Drouillard, Saginaw, Michigan; and Alfred Charles Drouillard III, Spruce, Michigan; nine grandchildren, twenty great-grandchildren, many nieces and nephews.
Besides her parents, Clare was predeceased by her husband Al, an infant daughter Clare, her sisters Lucille, Delores, and Margaret Mary, and a brother Lawrence, and their spouses.
Clare’s family would especially like to acknowledge their appreciation for her care by Caring Senior Service, San Antonio, Texas, and Concho Hearts Hospice, San Antonio, Texas.
A private Funeral Mass and entombment in St. Andrew Mausoleum will take place at a later date, arrangements being made by Porter Loring Mortuary, San Antonio, Texas, and W.L. Case and Company, Saginaw, Michigan.

To order memorial trees or send flowers to the family in memory of Clare Louise Drouillard, please visit our flower store.
Send a Sympathy Card