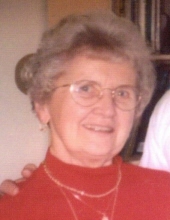 Wife, Mother, Grandmother and Great-Grandmother resided in Merrill, Michigan the majority of her life. She was the daughter of the late William P. and Katherine (Schrems) Hart. She grew up on Hart Farm located in James Township on Hart Rd. She graduated from St. Peter and Paul High School in 1948 and married Francis W. Keenan on July 5, 1954 at St. Peter and Paul Catholic Church in Saginaw. They celebrated 61 years of marriage when her beloved Frank passed away on February 17, 2016 at age 92.

Known affectionately as Kitty, Truly, a gifted homemaker, she baked, cooked, sewed and gardened for her family and friends. Her made from scratch dinner rolls and peppermint pie will never be replicated. Kitty also spent 10 years working at Dow Corning Semiconductor in Hemlock. Upon retirement the traveling adventures began. She and Frank were able to travel to England, Ireland, and Italy, including the Vatican during their retirement. She was active at Sacred Heart Catholic Church, their Alter Society and Choir. She and Frank were fabulous on the dance floor and were members of Washington Club in Saginaw, Michigan. At the time of her death, Kitty was residing at “Victoria's House” for progressive Alzheimer’s residents in Flushing, MI. Prior to Victoria’s house she spent time at The Oaks of Woodfield Memory care unit in Grand Blanc, MI. both close to where her son Patrick and daughter in law Missy lived. Both who were able to visit her often.

Family was everything. She loved her children, grandchildren and many hours were spent attending their school functions and sporting events, including swim meets. She had a strong work ethic, devout Catholic and was very patriotic.

Visitation will be Thursday, March 25 at Cases in Merrill from 4-8pm. Masks required and only 25 visitors allowed in building at once. The Memorial Mass will take place Friday, March 26 at 11:00am at St. John XXIII (Sacred Heart Church) in Merrill Mi. Church doors will open at 10:00am for visitation. Covid distance and mask rules will be followed. Interment of her ashes will be at St. John XXIII in Merrill. Memorial contributions in place of flowers are welcomed. Contributions may be made to St. John XXIII Catholic Church and the Alzheimer’s Society.
To order memorial trees or send flowers to the family in memory of Catherine C. Keenan, please visit our flower store.