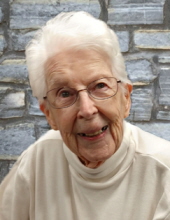 Beloved mother, grandmother, great-grandmother, sister, aunt and friend, passed away on Saturday, January 15, 2022, at the age of 97 years.

The daughter of the late Edward and Ellen (Pifer) Turner was born on July 6, 1924 in Hemlock, MI the second youngest of ten children. She graduated from Central Michigan University in 1943, having earned a teaching degree. She later returned and graduated with a Master’s degree. Alice married Walcott Denison Jr. on April 28, 1951. He predeceased her on October 12, 2014. She enlisted in the Army in May of 1944 where she served for 12 years, including 2 years in Germany. She received an honorable discharge in March of 1956 as First Lieutenant. Her military service medals include the Meritorious Unit Emblem, Good Conduct Medal with Bronze Clasp, 2 loops, American Campaign Medal, World War II Victory Medal, National Defense Service Medal and Army of Occupation Medal Germany. After the service she spent her time raising five children, working as a teacher and substitute teacher in Bay City, MI. In 1980, the family moved to a forty acre farm in Owendale, MI. Alice started a whole new career raising sheep. She was quite successful in breeding sheep, and learned to shear them and spin the wool into yarn. She enjoyed family, the peace of being out in the thumb area, working with stained glass, rug hooking and puzzles. She put her heart into whatever she was doing. Great Gussy! (that was her saying) We will miss her!

Memorial service will take place at 12:00 p.m. on Saturday, January 22, 2022 at W. L. Case and Company, 4480 Mackinaw Road. Elder and Lay Minister Robert Glover of Old Town Christian Outreach Center will officiate. Friends may visit with the family on Saturday at the chapel from 11:00 a.m. until the time of service. Those planning an expression of sympathy may wish to consider the Wounded Warrior Project (https://support.woundedwarriorproject.org/) or other Veteran’s organizations.
To order memorial trees or send flowers to the family in memory of Alice Louise Denison, please visit our flower store.
Send a Sympathy Card