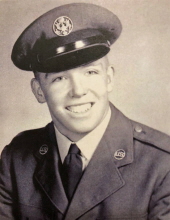 Albert (Al) G. Harris, 81, passed away Dec. 3, 2020. He was born on Jan. 12, 1939 in Saginaw, MI, one of four children of the late James and Bessie (Bender) Harris.
A dedicated husband, father and grandfather, Al is survived by his daughter Rebecca and her family: Tim Burns (husband), Luke and Mackenzie Burns (grand children). He is preceded in death by his wife, Elaine D. Harris (Anaman) and his sisters Marilyn Bailey, Lucille Vasquez, and Georgia Ann Harris.
As a young man, Al grew up in Zilwaukee with his extended family and friends. He joined the U.S. Air Force in 1957 and worked as a mechanic to keep our country safe by keeping planes in the air. When he returned from active duty, he joined General Motors and began his career as an electrician. He married Elaine in 1965 and they welcomed daughter Rebecca in 1967. He was a caring and present father to Rebecca, and a mentor to many at work and in the community.
Al has a successful 37-year career with GM, working his way from journeyman electrician to general supervisor. After retiring from the automaker, Al returned to the work he loved, building homes with John Bueker. With Bueker Development, Al completed more than 75 custom homes in the Saginaw Bay area.
Never one to be idle, Al continued to work after leaving Bueker, repairing small engines as well as canning, wine making, and general tinkering. Above all, Al enjoyed spending time with his crew, especially Sunday lunches with the boys.
The family is deeply thankful to those who loved and cared for Al, including Al’s nephew, Danny Nothelfer, Kelly Hughes, Jodi Thurston, Michelle Turner, and Gail Burdo. We are also grateful to the many neighbors and friends for their endless support: Bob and Judy Spitz, Larry and Sharon Rood, Tim Schroeder, Bob Gilmour, John and Connie Sivey, Don and Cheryl Hayes, and Harold Hare. We are especially thankful to the staff at Covenant who brought comfort to Al during his last days.
A private Funeral service will be held at St. John’s Lutheran Church in Hemlock, with a celebration of life planned for spring, 2021. Donations can be made to St. John’s Lutheran Church in memory of Al Harris.
To order memorial trees or send flowers to the family in memory of Albert "Al" G. Harris, please visit our flower store.
Send a Sympathy Card