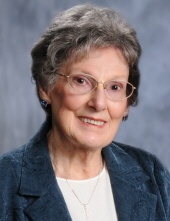 A lifelong resident of Saginaw, Shirley was born July 16, 1930 to Evelyn (Coger) & Abner Sager. She graduated Arthur Hill High School in 1948 and attended Central Michigan University. Shirley’s first job was at Reichle Supply Co, where her dad was the manager and Leonard Kraatz was a salesman. Len & she fell in love and were married Nov 27, 1953. Shirley was a stay-at-home mom to her 3 girls until all were in school then she became Peace Lutheran School secretary. The job she retired from was Peace Church secretary. During that time Shirley was a Girl Scout leader, youth group leader, Ladies Guild president & member, Saginaw Culture Club member.

Shirley was a seamstress & made clothes for her family & curtains for a local business. Her hobbies were gardening, playing cards with Culture Club friends, spending time with her family.

Shirley & Len celebrated 60 years of marriage before Len passed away February 27, 2014. She lived at Wellspring McBrite for 3 years then the past year at Barton Woods.

The family would like to thank the staff at Barton Woods who treated Shirley like family and went above and beyond to love her and care for her. Thank you also to Southern Care Hospice for their care for her the past several months.

Funeral service will take place at a later date. Memorials may be made to Samaritans Purse or Peace Lutheran School or the charity of your choice.
To order memorial trees or send flowers to the family in memory of Shirley Sager Kraatz, please visit our flower store.
Send a Sympathy Card