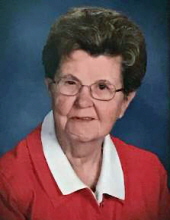 Beloved mother, grandmother and great-grandmother passed away on Wednesday, September 2, 2020 at her home; at the age of 89 years.

The daughter of the late Samuel Merritt and Inez Alfreda (Mortenson) Sherman, Sallie was born on November 25, 1930 in Menominee, Michigan. She graduated from Menominee High School. Sallie married William Richard “Dick” Swanson on August 26, 1950 in Menominee, Michigan; Dick preceded Sallie in death on April 13, 1999. She was a bookkeeper for over 25 years for a food wholesaler company, formerly know as Super Foods. Sallie served many years as a volunteer at the surgical desk at Covenant HealthCare, including a three year term as the president of the Volunteer Association. She was a long-time member of St. John’s Episcopal Church, and a former member of its choir. She enjoyed being a gardener, seamstress and crafter. Sallie had created personal keepsakes for each family member as her family grew.