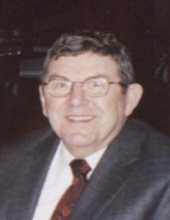 Beloved husband, father, grandfather and friend passed away on January 28, 2021, at the age of 83. The son of the late Melvin Albert “Pete” Adams and Nora (Honsinger) Adams, Bob was born November 10, 1937, in Saginaw. He graduated from Arthur Hill High School in 1955. He continued his education at Bay City Junior College and Northwood University. Robert married MaryJo Parrish on August 19, 1961. She predeceased him on October 30, 2020.
He retired from Catholic Federal Credit Union (Jolt Credit Union) in 2010 after 44 years of service. Bob loved spending time with his family and absolutely adored his grandchildren. He found true joy in helping people and making a difference in the world.
Besides working outside on those “Northern Michigan Days,” Bob enjoyed sailing, traveling and meeting with “The Squad” at Riverside Restaurant.

A private family burial will take place at a later date at Oakwood Cemetery to honor Robert Adams’s life. Those planning an expression of sympathy may wish to consider donating to the online scholarship, Catholic Federal Credit Union-Robert Adams Advised Fund (or by mail to) Catholic Community Foundation of Mid-Michigan.
To order memorial trees or send flowers to the family in memory of Robert Roy Adams, please visit our flower store.
Send a Sympathy Card